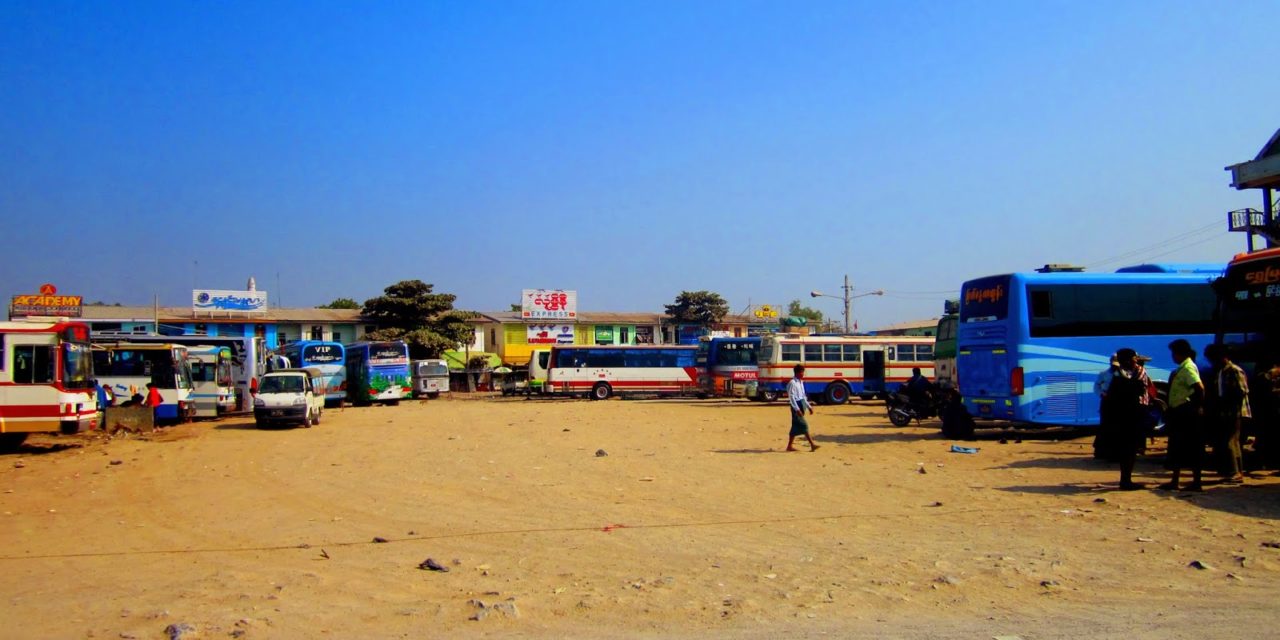 The bus was comfortable
enough for a half day travel from Bagan to Mandalay. It was an easy
one considering my love affair with long bus rides in a country
road. This was made special because it was in the morning, more
scenery, more people to watch. Traveling, one can see that Burma is
open for business. A lot of construction going on and a new
expressway was opened to make travel faster and safer. But what I
like most was the country road with the curves and vast horizon where
the brown earth meets the blue sky. There are instances that trees
dominates my vista and in those cases I wished I am in an open car.

The bus stopped in a vast
area where all buses from all over Burma drop and pick up passenger. At the terminal station I was mobbed by the local men offering
hotels and a ride. I wondered how could I get my bag at the
compartment. I let the bus conductor swam in the mob of people to get
my green precious backpack – my wardrobe and home.

I can’t proceed with my
own plan because I made friends with a Chinese and two Malaysian ladies.
That’s a good reason for breaking your own plan. In the bus station I
was waiting for Clover – the Chinese friend before proceeding to the
hotel where Cindy and Jenny – the two Malaysian – were staying. Aside
from that we do not have any other plans.

When we met Cindy and
Jenny it was decided that we will spend our new years eve in U- Bein Bridge. But before that we need to rest and enjoy our USD20 hotel
room with its WiFi.

In Mandalay U-Bein Bridge
is what really excites me the most. Its aura and the sunset is worth
a million.

The 1.2 kilometers teak wood bridge is a major tourist destination in Mandalay. It is ancient and rustic and sets the mood for moment of thinking and relaxing. It is a favorite spot for photographers and painters from all over the world. There is no entrance fee to get there all you have to bring is your camera and your big smile.

After enjoying our moment on the bridge we decided walk along the banks of the lake wherein makeshift eateries sprung like mushrooms. Clover on the other hand slipped away and joined other Chinese tourist in riding a boat to the center if the lake while we content ourselves watching the bridge and waiting for the sun to finally set.

Tears were not flowing but gladness and joy abounds as I stare in one of my most memorable sunset. It was the last sunset of the year. First time I spend new year away from my family and in a distant land. It was worth it anyway.

Last sunset of 2013   The next day I took the
train to Hsipaw alone. You may read the story here.

Mandalay Central  Train Station
When I came back in
Mandalay I was on my own again asking a local to tour me around for
10,000K.      Our first stop was the
Mahamuni Pagoda.    “You must witness the washing of the face of the Buddha”    …exclaimed my guide. It was a surreal experience seeing
locals worshiping at 4am in winter colds. Never expected myself standing for hours just to watch them – local and foreign Buddhist – anticipating the lay people to wash the face of the golden
face of the Buddha. There was no program. Men in white robes will enter
the sealed temple and do some series of wiping of the face of the
Golden Buddha.   You must be there early in the morning to witness the ritual.

For me, a Christian there was
nothing extra ordinary. I did not understand what was happening or what the locals were chanting – but I guess it was their prayers and intentions. I know for the fact that the ritual of washing of Buddha’s face
means something for them. What I admire is the devotion
of the people lining up in cold morning and kneeling down in a small
place to worship their God and say their prayers.     Our next stop was the Mandalay Hill. According to wikipedia, it is on this hill the city got its name. Mandalay Hill offers a panoramic view of the city. Sunrise or sunset you may want to catch it there with your delight. It takes time to climb the hill so my guide asked me if I wanted to pay him extra Kyat for him to bring me up with his motorcycle. It would cost him much gas to bring me up there. I agreed because if I climb the hill myself I might not catch the sunrise, so I give in for 1000 kyat.        On the top of the hill was Sutaungpyai Pagoda. There are actually a lot of pagodas and monasteries on the top of Mandalay Hill. But I did not intend to visit those. My agenda was the sunrise ala Mandalay.

I waited for less than an hour before the sky show the beauty of the city with the help of the sun. While waiting I spend time watching locals and and pilgrims worshiping and offering incense at the temple at the hill. Some are there to do the foregoing and some are there to witness the sunset juts like me.         The curtains was rolled and the vista was beginning to change from foggy to a magnificent canvas of a great painter – God for sure. The sun appeared. Dark line forming the image of the mountains dominates the skyline. The sky turned from darkness to orange to blue in a matter of minutes.

Back at the temple the light revealed the intricate and detailed design of its walls dedicated to the gods. The temple was marvelous and rich in colors and perspective. It is a works of art, work by man for his creator and God.

Old lady selling pancakes at the foot of  Mandalay Hill     If I have an ample time in Mandalay I would spend a whole day in Shwenandaw Monastery and writes poems and stories. The teak monastery is the place to be. In fact if it landed on the top of my most adored places of worship in Burma. The first time my eyes met the wood, I was hypnotized. Its lavish and rich caught me in an instant. Wonderful enough to believe that someone made it for his reason.

I walked barefoot as I did in all monasteries in Burma but I did not mind my foot touching the teak wooden floor. I could feel the history on my callous feet giving me the spirit to continue walking back and forth and around the monastery.

As I walk, I touched every inch of intricate walls and foundation. Every inch of it are works of art. I did not grew tired of touching every piece carved by hand. No wonder it is being adored from the roof down to its floor.

I worship the time I was alone. It gave me time to relax and feel the vibe of the monastery. I own the place I was free to touch and adore the pieces inside. That’s the beauty of traveling alone, you have all the time to appreciate the calmness of this kind of spot. No talking just your breath and the air passing the window of history. If not for the bus of tourist that came I could stay there all day. But I had to move as they were about to mob the monastery.   Traveling is moving after all.

I saw a high wall in surrounded by water and only accessible via bridge. I knew it is the Mandalay Palace from my photographic memory of the map of Mandalay. Everyday before the trip, I almost memorized the streets of Mandalay – the downtown at least.               It is the royal palace of Mandalay surrounded by royal guards to protect the fortress and symbol of history of this once monarchical land.

The whole palace where visitors are allowed is a replica of the old that was bombed during World War II by allied forces. The palace was huge and symbolizes the architecture of the Burmese people. The Palace has a lot of doors passing through to each rooms. There are life sized figures of the king and queen sitting in the throne ruling the country.

I did not had a guide when I did the tour. I haven’t seen any tour group actually. It would have been better if the palace has a guided tour after the tourist pay the entrance fee. Its not that we will study while on vacation. Guided are necessary in order to understand the soul of the palace.

Time to say goodbye. No definite time when will I touch Burma again but the scent of the country will forever be cherished. This country has been good to me and the good folks make this country worthy of visit. 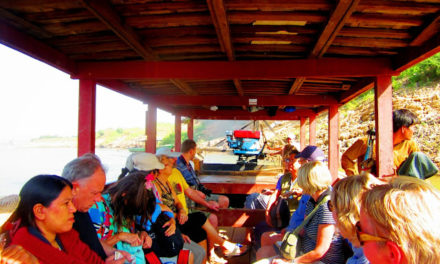 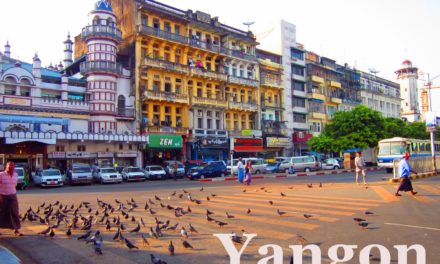 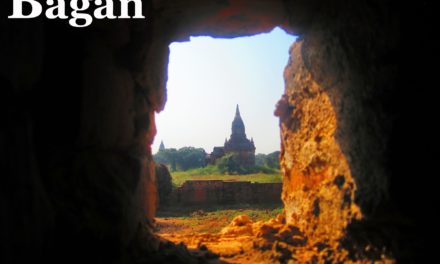 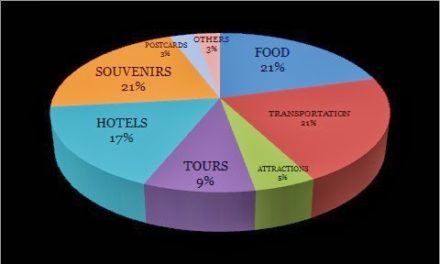